<p>This is the same drill as the last, the players must perform a 'spin pass' in lines of four, the progression made in this drill is that a defender is being added (marked by a red cone). The particpants must draw the defender in and choose the right time to deliver the pass in order to get around the defender without being tackled or them intercepting the ball.</p><p>After the line of four has completed all the passes or beaten the defender.</p>

<p>Similar to the last drill, performing a spin pass requires the particpant/ athlete to maintain a high elbow, recieve the ball early, presenting a target with their hands in a 'W' shape. The should catch the ball and pull it across their body.</p><p>There will also be an element of 'decision making' in this drill,</p> 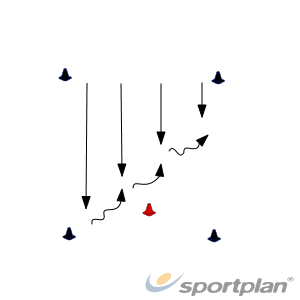