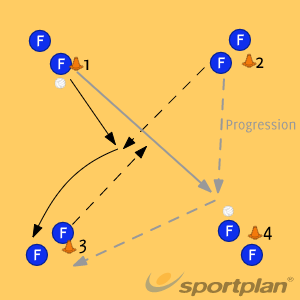 Thank you, what a brilliant site. Our team uses many of these effective...
Debbie

The 2 and 3 players with the ball then pass forward to the line they are running towards, and join the end of that line.

The players from 2 and 3 who have caught the balls then become the passers for the other diagonal players (from 1 and 4) to run.

The ball placement and timing need to change in each variation.

In the progression ball carriers and runners need to be more aware of whether the other runner will run through the path of the ball.

Change of direction added in. Players must run in a V shape, away from the pass, before changing to run back towards the pass. They still receive the ball from the same Player as before and pass on.

Ball carriers need to be more careful when timing their throws.

Split players into pairs with 1 ball between them and set up as diagram (half a third each if available).

Black C is the feeder and has the ball. The white C is the worker and will be working for 2 minutes and will then swap roles with the black C.

The worker works for 2 minutes trying to complete as many circuits of the star as possible in the 2 minutes.

The feeder can only pass the ball to the worker when they are driving forwards to start with.

Time your run - pass and move

This practice encourages concentration and awareness.

3 players (A, B and C) stand on the cones making the top three points of a star (they are static during the practice), the fourth point in made up of a queue of players in pairs.

The first pair start. Players 1 passes the ball out to player A and follows their pass, running around them.

Player 2 runs staright forward and receives the pass from player A in the centre of the star.

Player 2 then passes out to player B and follows their pass running around them.

Meanwhile player 1 has run back into the centre to recieve from player B.

Player 1 then passes it out to player C and follows their pass around them.

Player 2 then passes the ball out to player 1 and player 1 passes it to the next pair.

They both then join the back of the line.

Rotate the static players as and when.

The aim of this drill is to get the players to think about passing and moving in variety of directions at speed.

The ball must always travel around the edge of the rectangle/flag. You can change this direction from clockwise to anticlockwise as an when you feel they are ready (or to try and catch them off-guard).

After making a pass players must swap positions with their opposite player.

You can add in as many players as you like along the edges but always leave one pair at either end.

Players work in pairs over varying distances depending on the pass type. Each pair should stand opposite their partner. Each pair are given a number. The first pair are 5, the following pair are 10 and so on, going up in denominations of 5. Players have to make their allocated amount of passes. Once they have done that they shout 'bump' and swap places with the pair next to them with the higher number. They then start their passing again, but add 5 to their original number. The pair who were 'bumped' have to start again, subtracting 5 from their starting number. The aim is to move up the group and have as high a number as possible. Work for 2-4 minutes, then stop the players to see if they have moved up or down.

Both W1 and W2 simultaneously receive the ball from the feedres, as shown in the diagram, and return the ball to the same feeder. Then both W1 and W2 move around the cones in a figure of 8 receiving the ball at each cone from a feeder W2 will always be one station behind W1

Split players into groups of at least 10 players, with one ball between them inside a square grid (half a third). Players work in pairs (1-4) who start opposite one another. The ball starts with the number 1 (top left corner). The ball is passed around the outside of the grid. After the player has thrown the ball they switch places with their partner. Players do the skill practice for 1 minute then rotate clockwise to the next numbers start point. Challenge - if players do not make it to their point in time and miss the ball they are out.

3 teams of 2 players. 2 teams combine to play against the 3rd team. If 3rd team gets the ball, the team that lost the ball is in the middle and the other two teams combine to continue. Once five passes have been achieved, a different pair become the defence.

Players pass the ball out to the side and then follow their pass and run behind the player they passed the ball to. Both the ball and all players should be moving steadily at all times.

Around the 3ft mark

Around the cone - meet the pass

Two passers (blue) start with the ball on the outside red cones. Two workers (red) start on the blue cones. One worker goes one way around the outside cone and the other goes the other way around the cone. As they reach the middle of the square they receive a pass from the passers and pass back to the player who passed the them. Repeat 4 times and then change direction.

Around the cone - meet the pass Progression

Set up cones in a bow tie shape, with 2 cones on the third line, one halfway down the end third and 2 at the end of court, as shown in the diagram. Have one player start on the middle cone with the ball, and the other players split at 2 opposite corners, the third line right corner and end line left corner. Passing order: Middle --> Bottom Right, Middle runs to bottom left Bottom right --> bottom left, Bottom right runs to middle Bottom left --> to middle Repeat on other side, with the player in the middle becoming the starter for the opposite side.

A min. of 8 players standing in four corners of 1/3 of the court, one player with a ball. Player 1 passes the ball into the space ahead of player 2 who runs on to receive the ball and passes it into the space ahead of player 3 etc. Players move on to next group after the pass. Progressions: Change direction. Second ball starts opposite the first. Shrink and stretch the square.

4 cones are placed as shown in diagram and players work in pairs with one ball. The worker (red) runs to any cone, changes direction and receives ball from feeder back in the centre. This practice works on a quick change of direction.

Working in pairs with 1 ball. Players pass the ball between them -one player is passing accurately and the other is throwing balls slightly wide and high for the other player to stretch and catch - without moving their feet where possible.

Chest pass on the move

Players work in pairs with 1 ball. The feeder stands static and feeds the ball to the worker. The worker runs towards the feeder to receive the ball and then passes it straight back. They then run away from the feeder before turning and running back for the next pass.

Players in pairs with one ball about 5 metres apart.

2 balls, 2 players face each other. Both players pass the ball straight and at the same time, but one player uses a chest pass and the other a bounce pass.

Team forms a large circle. Two balls start at opposite sides of the circle. The balls are passed around clockwise to every second person.  Both balls are trying to catch up with the other ball.

Set up a square of players, 5m x 5m, numbered 1-4 as shown. A player each from 2 and 3 runs forward. They both look right to receive the passes from 1 and 4 (1 passes to 2, 4 passes to 3). The 2 and 3 players with the ball then pass forward to the line they are running towards, and join the end of that line. The players from 2 and 3 who have caught the balls then become the passers for the other diagonal players (from 1 and 4) to run. 20 passes each looking right 20 passes each looking left (3 gets the ball from 1, 2 gets the ball from 4)