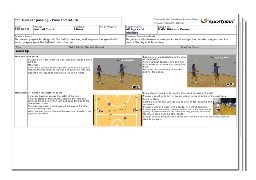 Rating: 4
from 12 members ratings
Log in to view
This Sportplan session has been designed to prevent players lingering on the ball and missing a good passing opportunity. To rectify this common coaching complaint we've designed a Speedy Passing Session that concentrates on quicker passing and equally fast return passing.

Sometimes your team can be their own worst enemy - they may be well drilled and technically strong but if they're slow on the ball then they will leave themselves open to attack from weaker but speedier sides. To ensure the spell of slowness isn't cast upon your team try this Sportplan session with your players and just like magic see the improvement in your team's ability to think quickly and whizz the ball around the court.

Designed to get the whole team using quick hands, this session is simple to set up and just as easy to follow, with animated drills and clear notes. All you'll need is a few cones and a few balls. Your players will need to be on the ball though, focussing at all times. They'll have to receive the pass, return the ball as quick as a wall pass to the next player and then move into space to receive their next pass.

By the end of this training you'll have a team of passing wizards who pass so quickly you'll think it's a trick of the eye!