Star in Agility and Endurance! 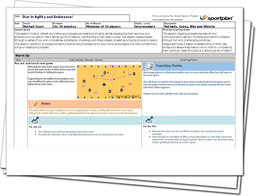 Use this session to retune your player's endurance and agility, enabling to perform at a consistently high level out on court! Go through a bunch of fun and competitive practices, challenging your players, but also going back to basics. This session caters for all abilities and ages, so why not give it a go today!

Use simple but effective drills, such as the shuttle runs, to start working on your player's fitness. It's important to establish where their fitness is currently at, before you can modify the drill to progress further. Work on their agility, with drills such as the Illinois Agility Run, so your players will be able to turn quickly at speed - this is an important skill in Netball and could enable your players to lose their marker effectively to receive the ball.

It's important that your players also have the endurance to last a full game of Netball, and having the ability to perform at a consistently high level could hand you victory! Work on your player's stamina and endurance, making sure they are also fully focused on the task and ready at all times for the ball. Quick reactions will hand your player an advantage, as well as a high level of fitness to outlast the opposition!