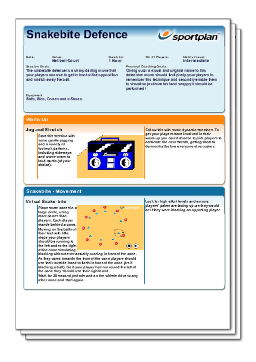 This session looks at teaching your team the Snakebite Defence - a sharp and decisive pincer movement that puts pressure on the attacking player - Getting your players to make incisive interceptions.

The snakebite defence (a crazy name to help your players remember this move) is a venomous move that is sure to poison the opposition's attack. It's fast, it's effective and it's a sure fire way for your team to rustle through the grass and strike to win possession and turn defence into offence!

When your players are stood behind an attacking player it can often be difficult to get around them before the attacker's gained possession, however the snakebite's strong point is that it uses fast feet and sharp darting running to sneak around the corner and snatch away the ball. The other team won't know what's hit them as your team win ball after ball, neutralising their attack and frustrating their players.

To start this session we get the music pumping, performing the fast-feet warm-up to the music of your choice (Sportplan suggests a bit of Whitesnake) before then practising this defensive drive with cones before then moving onto some real snake-bite exercises. After using this session your players should be turning the ball over more often in their next game, snatching the ball from the opposition with more incisive interceptions.