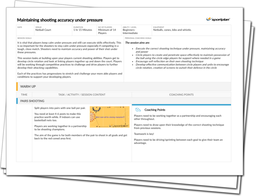 This session looks at building upon your players current shooting abilities. Players get to develop circle rotation and look at linking players together up and down the court. Players will be working through competitive practices to challenge and drive players to further develop their attacking capabilities.

What?s in the session?

During the warm-up, you build your players partnerships in their shooting pairs before developing their shooting under pressure during a game of killer.

The skill development starts with a practice which works on the GS and GA?s movement in the D to get free. The practice then incorporates defenders to make it more match-specific working on holding the defender to create space for others to lead in to.

After taking the practice back into the mid-court to incorporate the C and WA in the move, the conditioned game at the end moves players into uncomfortable positions to help them recognise the movement of other positions and how it can help their own.

Create decisive, clever forward, able to create space and finish with every shot.