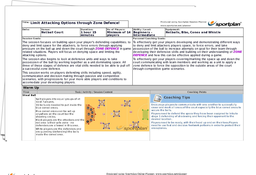 This session looks at the defending principle of zone defence, denying and limiting the opposition's attacking options. Build upon your player's current defensive abilities, working together as an unit, forcing errors by applying pressure and giving the opposition a hard time with the ball!

Focus on areas such as speed, agility and communication, ensuring that your players work as a team to deny the opposition, using a series of fun but hard-working drills.

By using drills such as Interception Circle, you'll get your players used to pressuring the opposition and limiting their time on the ball, forcing the player into an error. Remember to encourage your players to be assertive in defence, making sure they communicate with one another and improving their existing defensive skills, as you work through the session. Build up your team's knowledge of zone defence and when is best to apply this in a game situation, ensuring that all of your team understand the principle and know their roles within this.

Deny and limit the opposition's play in your next match with this week's session!