In groups of 4 or 5, using a space relevant to players.

In this example, we're set up for a centre pass

WA player drives forward to recieve a pass. She turns in air to send ball onwards onto one of two options (could be GA, GS or a C). She then drives to edge of circle and recieves a return ball, whereby she should be landing balanced on edge and able to place ball neatly into shooters.

Progressions:
Other players should be moving for 1st and 2nd phase, and vary movements

Add in a defender

How quick can the player make the turn; how quick can they release the ball? Some will be from balanced position; others may be able to release whilst in the air. The quicker they can turn though, the less time a defender has to set up on them.

Quality and accuracy of the pass must remain high

Ability to land on either leg to enable a turn away from a defender or into a good position for onward pass.

In addition, consideration as a feeder about how to help enable your team-mate to take off and land on the turn; release point, timing.

When adding in defenders in later stages of practise, ask them to vary their style to encourage the attacker working to think more (on side, in front, close, off body, behind) - can attacker turn AWAY from defender? 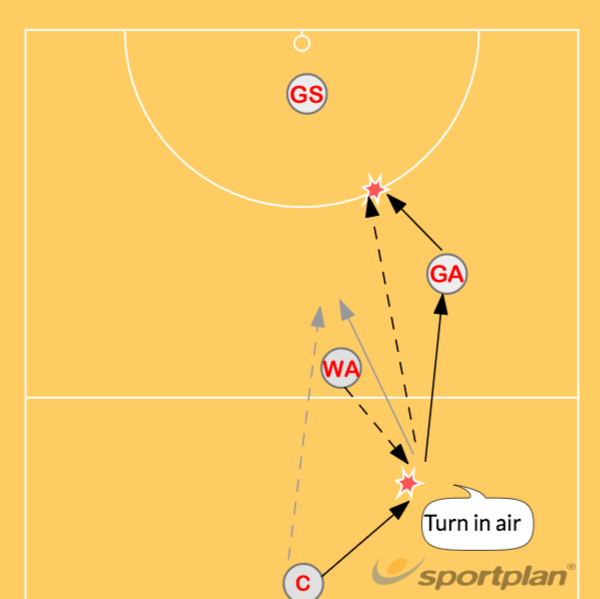 Netball - attacking movement - the half turn

Driving into space and clearing