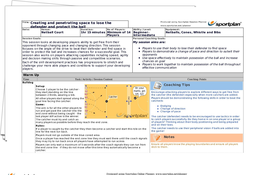 A good pass isn’t just made by the passer themselves, but also by the way the receiver leads into space to make the pass an option. This session develops your players understanding of the drive into space, focussing on the angle of the drive, speed and timing in relation to when the pass is an option.

What’s in the session?

The warm up encourages players to think of their run and how their explosive movements can get away from the opposition player.

The skill development begins with 1v1 drills which allows the player to recognise the movement patterns of getting free - whether they fake one way and explode out the other from behind the marker. This also gives a concept of timing before it progresses on to Marg Foster drill which develops phases. The receiver not only leads for one pass, but they have to make a pass and have the awareness to make a clear movement for the following one.

The final part of the session uses a conditioned game to develop your players skills in a match-specific situation. The focus is to move the ball into specific areas which requires clever movement.

Make your players not only quicker and faster, but also more thoughtful with their movements to read the game one or two plays ahead.