A short circuit warm up.

Can be used with anywhere from 5-10 players

One player on each station.

1 minute each station then rotate clockwise, in the direction of the arrows.

Orange cones in corner are for agility.  Player sprints to cone and foot to foot back to centre cone or any other backwards motion you desire.  Can also be used with one foot landing at the end of each cone point.

Moving clockwise to next circuit station.

Agility on the next station, cones should be set up so that there is a definite side to side running and therefore practice landing on the outside foot and pushing off for speed.  Focus on speed and change of direction.  Watch knees and ankle placement.  Can use the end of the row here to practice three feet and then putting arms up or landing on one foot.  Adjust as desired.

Move over to the sprint station.  Each player should sprint from centre point of court to sideline and jog back to centre.

Head to the goal circle.  Place 4 cones in positions around the goal.

All players practice their shooting in each position.  Focus on accuracy for different positions.

Move to the defending the line where each player must practice with their feet on the sideline, then jumping or stepping back quickly for their three feet before placing arms in defensive mode.  Can be done with two players, one standing with ball (can start with player throwing ball up to simulate a pass and then turning in towards the defender, so they have to move with them) while the other defends, or both players using the sideline as a guide. 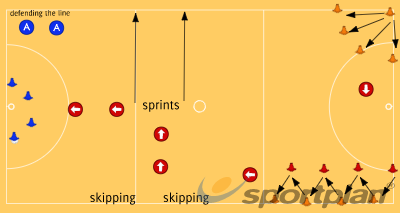 Warm Up: Push Off