Under pressure shooting practice for blue A players.

Blue players are lined up one in front of the other.  When the coach blows the whistle, the first Blue player attempts to shoot the ball.  The Red player has to run around the court at the same time, and try to get all the way around before the Blue player makes a goal.  If the Blue player misses, the shot goes to the next blue player while the same red runner keeps going until they are all the way around.  If the blue player makes a goal, the red player stops where they are.  The next Blue shooter steps up and commences shooting while the next red player starts to run back to home base.

As soon as a blue shooter gets a goal, the red players stop where they are.  The last red player (Golden Child) is the only player that can "unlock" all the stuck red players and free them all to run home before the blue players get a goal.

Aim of the game is for the shooters to shoot under pressure and the red players to beat the blue players through their rotation.

mix good shooters with not so great shooters.

swap over when finished! 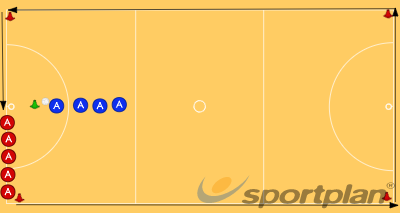