In groups of 3 players pratice boxing out on a 'Shot!' call.

Defender sets up facing their mark and performs proper pivot and makes contact with their mark to "Box Out" - Calls out "Box!" when hearing "Shot!"

In 1-on-1 scenario players battle for the rebound.

If Defender gets rebound drill immediately switches to 2-on-1 fast break with shooter as the Outlet (calls "Outlet!" and positions his movement to get the pass in the lane and cuts to the middle - Defender, now on Offense, follows behind the pass and fills the opposite lane)

The man who was boxed out goes on Defense and must break down the floor to "Stop the Ball!"

After 2-on-1 fast break players switch roles and drill continues heading the opposite direction.

If shooter scores, he stays as shooter.

Focus by Defender should be on their mark while "sneaking a peak" at the player with the ball.

Proper footwork on "Shot!" call and making contact with their mark using their hips and arms out wide to create "rebounding zone".

Play the ball off the rim.

Once defender gets the rebound immediately turns attention to coming down solid on two feet, holding ball by the ear away from opponent. Chooses to dribble with proper cross-step to close the distance for a proper outlet pass and follows on offense immediatley. 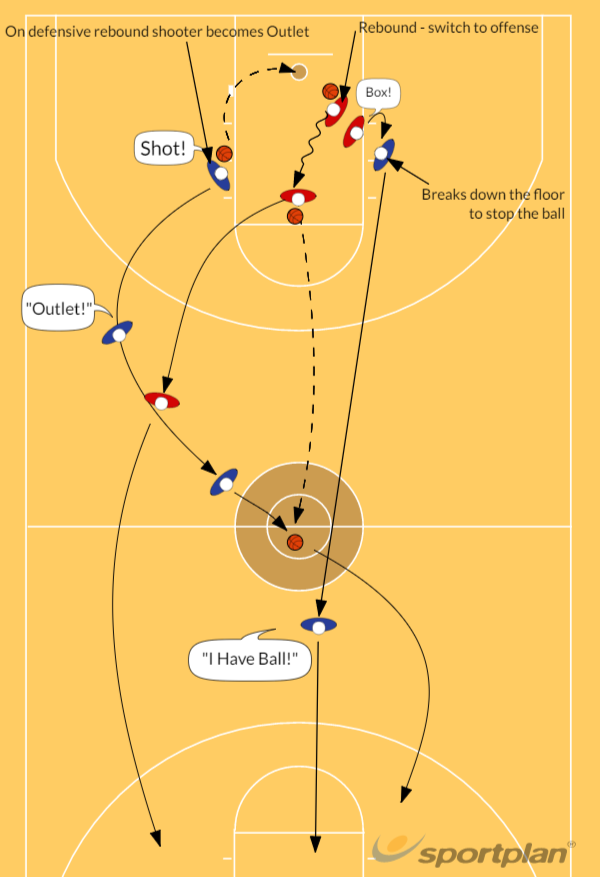