This is a circuit which puts together simple drills to enhance passing, shoting , defending and movement. More simple drills can be added to the circuit, but I have stuck with 3 as it is easy to review how the players are doing and spend more time on the drills. The drills will be approximately 3 minutes each.

One player will shoot, assuring that they have the right stance and positioning where as the other player will defend the shot 3 feet away. Both players will look for the rebound underneath the post.

2)Getting into space through movement

The two players will be in the triangle formation and run into the spaces infront. Once one player has the ball at a cone they will always throw diagonally with the other player being in between the 2nd and 3rd cone to receive the ball in the air landing at the next cone. The players are to receive the ball pivot and use the right pass either being chest or bounce pass. Where as the other player is to time their run and keep the flow of passing going.

3) Shouder pass 'piggy in the middle'

The players are to stand a fair distance apart to ensure that they can use a strong shoulder pass to the other. The idea again is perfecting the core skills of the pass so that the basics are improved. The person in the middle will try to intercept the passes but if they're strong enough they will not intercept therefore all loopy passes will be intercepted.

One foot forward stepping into the pass

Return back onto the landing foot

Lunging into the pass

Foot stepping into the pass

W shape around the ball elbows sticking out

Returning back onto the landing foot

Step into the next pass

Step into the pass opposite leg to the throwing arm

Fully extend the arm coming from behind the head for power 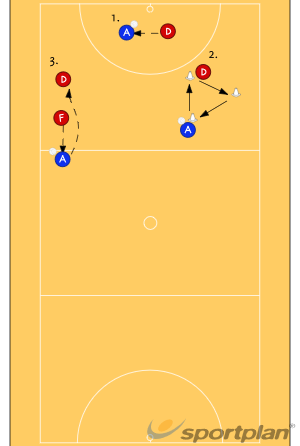 Gladiators in a Square