After we hit the midfield with strong forwards and create a quick ball, we go wide in the same way. We mix forwards with backs in the outside. While that ruck is going on, the 10 calls for the move, in this case he calls "X".

Our basic shape is a 10 or a playmaking back as first reciever with an inside runner, a flat loose forward (8 or 2, or the fittest tight forward in your pack) and a back to drift outside (12/13/15) with playmaking skills (fix defenders, quick hands, offload skills, kicking game). Then we have another loose forward (6 or 7) who reads the passing option to run his support line. For last we have an open winger (11/14) in the 5m channel.

if the closest defenders begin to push really soon, he can pass inside to a back. (attack the transition zone)

if the closest defenders run straight but the outer ones begin to drift too soon, he can pass short to the forward (2/8).

if the defence is not drifting, he can pass to the back behind the 2/8 (as decoy/screen pass). Then he can keep playing outside.

There's no preset option, only preseted movement. Everybody is an option, the playmaker reads what the defence is offering 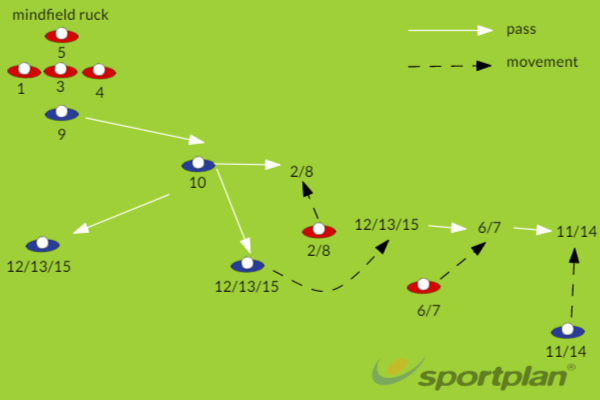