How to get girls to stop crowding and move into space??

How to get girls to stop crowding and move into space??

I am coaching Under 13's (girls aged from 8 - 12) just wondering what the best way to get them to move into space and not crowd would be.

One of the simplest methods is to teach the pass and fill system where the person who passess the ball runs to the position the reciever left. For Example if the GK is passing the ball in from the left side of the goal post at the base line, the WA may may run from the Rt side of the court to recive the pass so the C would drop back to the centre third and the Gk would run run to fill the space the WA left. At the same time I teach players to watch the move players in front of them amd take the opposite side of the couut. Using cones set up as a square and having one player in front(A) who initiates the move and another player on the back cones(playerB) who must move according to what the front player does is a ussefull drill to teach movement. So if Player A moves to the Right player B moves to the cone on the left, if player A runs backwards to the rear cone player B; must run forward andso becomes the player who initiates the moves. You can do this with several rows of canes if you wish. Finally I would taeac a whole court system and practice it without defence so the playrers learn where to run from and where to recieve the pass. I ususually do this from the Gk passing the ball in from the defence end and finish with the pass into the GS or GA depending on the system you use. I find it really usefull to practice the system down the court without defense. Good luck.

With littlies just starting out, I normally play a butterfly game where the girls are all given numbers from 1-7 (or however many girls u have). The girls must run around in two thirds of the court continuously moving, A ball is given to a player and as they catch the ball they must yell out their number eg "5". The next number then runs towards the space to catch the next pass. This helps the young players to understand that if its not their turn then they must stay away from the space. Once they get the hang of this, I move on to the fill in method. Goodluck and I hope it helps %3A)

hi often use a drill , which invovles spliting the court into 3 chanels, and naming them 1,2 and 3, split you plaerys into 3 groups and have them stand behind baseline in each chanel. Get players to move up the court in groups of three,as the coach call out a number, the player in that number must move to another chanel, the player already in that chanel must move to fill the empty chanel , i beleive this helps the players create good balance on the court. 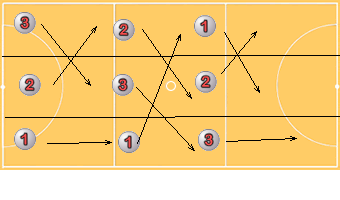 In a very similar way to the last post.  We use a very simple system whereby during a practice match situation we split the court as above and tell each position that they have to keep their respective tracks.

GK/GS in the centre track, WA/WD in one track etc.  It easily focuses the mind during a game situation without over complication.