Players Start where shown in picture. Blue Team will weave between the two orange cones on the baseline closest to them. Then sprint to the cone on the three point line. Then return to continue the weaving between the other 2 orange cones. Team red is to start at the same time that team blue starts. They are to stutter step through both ladders until they reach the end orange cone. The yellow team also starts at the same time as the others do, they proceed to collect a basketball from the coach and dribble between the blue cones. Once they get to the red cone they are to drop the ball. The red team after completing the ladder runs will then defensive slide from the left side of the court to the right while facing the opposite end of the court. All three teams are to start at the same time, and complete all 4 obstacles on their way around the course. There are 4 teams of 3 players which are all wearing either blue, red or yellow. The intervals of this program will be 1 minute per team on the course. The rest period will then be 3 minutes break while the other 3 groups complete the course. There will be 6 repetitions of this course per group. 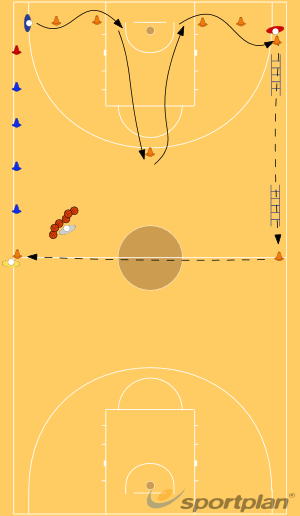