3 players on the perimeter, top passes to the wing player on the same side as the post. Both the passer and post screen for the opposite wing. Wing either cuts over the screen, in which the screen will basket cut. If the wing player cuts baseline, that screener will screen for the top screener to cut to the rim, they will then fill to the top of the perimeter. The cutting screen will fill back to the wing if the ball is not passed.

Proper positioning and angle for screens

Come off screens hard looking for the ball

inside out game can happen on the wing. 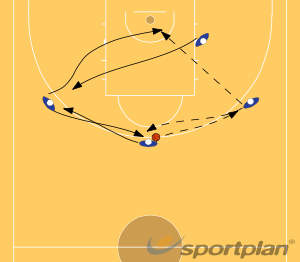