-       Drill run simultanously from both sides of the court

-       RedA (RA) initiates the offensive action by making contact with the defender (YEL), then straight back to the ball for the pass from BlueA (BA) at the elbow

- After the pivot to face the basket, RA fakes a shot, then cross step dribble drives for a layup around YEL

- RA scores, gets their own rebound and passes ball back to BlueD (BD) and fills in at the line behind BD

- BA decomes the defender on the same side of the court

Load 1: same as above by with a short jump shot instead of a layup after a dribble cross step

Load 2: receiver catches the ball in the air while twisting toward the basket so as to land already facing the target, then cross step dribbles drives for lay up

Load 3: receiRecever catches the ball in the air while twisting toward the basket so as to land already facing the target, then cross step dribbles drives for lay up around guide defender and gets their own rebound (must choose to attack the back of the defender with the correct pivot foot and cross step dribble drive)

Load 4: catch and shoot (receiver turns in the air while receiving the pass, lands on both feet facing basket, and immediately pulls up for a shot, then follows in for rebound)

NOTE: Can be run with two balls going simultaneously once all athletes have a handle on the motion and where they are supposed to go after each movement. This will require them to keep their heads up on their drives to the basket and ensure they clear in such a way as to not get in the way.

Inside foot for pivot 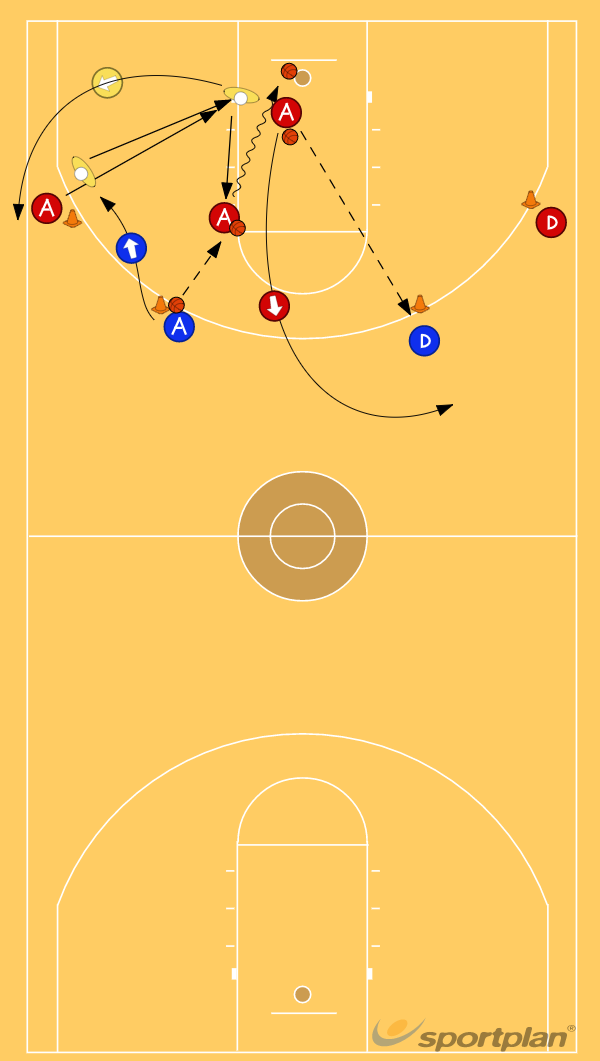