How do you stop crowding

How do you stop crowding

My friend coaches an under 13s team and when someone has the ball they all run for it like seagulls going for bread. The coach has told them many times to spread out and for not everyone to run to the ball at once but the girls keep doing it and they can't get the ball down the court.

It is a common problem! Often the girls don't realise that by coming too far down the court they are affecting their teammates ability to get the ball into attack. They think they are doing the right thing by "helping out" but they are doing the opposite. This really needs to be emphasised to the players!

One thing that helped my girls to realise, was to get a white board (I just laminated a picture of a netball court) and I would draw X's where they all were at a given time. I used to do this in 1/4 breaks of games and at training. Once they saw that basically the whole team was concentrated in a tiny area they seemed to get it more. I would then draw on the sheet where I wanted them to stand etc. Seemed to work.

What I do now is to drum into my players that they should be standing as far back as possible when the ball is going into attack. Backline throw in - C must start in the centre 1/3 and only come down if needed. Then GA and WA must be sitting behind the goal 1/3 line and again drive forward when needed. I constantly remind them not to come down too far and it is paying off. They can see that by doing this the game is more open and often the GA is able to get a fast break into the ring which results in a goal.

Another good idea is teaching them a "clearing out" drill. Start by going over the basic side to side step, calling out left or right and getting the girls to follow your directions using side steps. Then add on a backwards step, either straight back or on a diagonal, so they go side to side for approximately 2 metres then clear out with a backwards or diagonally backwards step,when you call "CLEAR OUT". Lastly teach them to "re-offer" using some sort of drive or lead back to where has ended up.

You could also teach them to stay in their own "channels" or side of ther court - WA does not cross over to GA side, C stays in centre of court etc. This will give them space straight away - there are lots of drills you can do around this. Practicing base line or side line throw ins with everyone starting in the right space really helps. Just telling them to spead out doesn't do much - explain what space they should be in and how if they go into another position's space they also take their defender with them so that makes 4 players in that space now. Allie's idea of drawing on the whiteboard is a good idea to help players visualise how they get too crowded.

I think that the simplist way would be to either draw a diagram of where you want them to go or in your training do drills focusing on their positions.  Start at the backline and have the girls pass the ball to the other end, but they are to lead forward and stay on their side of the court. I agree with Narelle you need to get them to know their positions on the court.  When their is a throw-in call out "Positions" and the girls will know where they should go

Had this problem early on in the season mainly due to some players not quite sure when/where/what they should be doing.  We practised set plays with throw ins from GK from the goal line with positions given numbers 1,2,3,4,5,6 to provide offers in that order e.g. WD 1, GD 2, C 3 etc.  If 1 sucessfull, 2 to offer lead for next pass and 3 to provide back up.  You can also do this in a practice game by numbering all players and, then, after a few goals, change the sequence slightly to keep them on their toes (just keep a note of the number that goes with the position so you can prompt if necessary).   Also had to encourage players to offer one good lead then clear out for next person if not successful rather than faff around and get in the way and also that it didn't matter if they didn't get a pass as long as they created space for others or reoffered.  The odd player needed reminding to offer only in their area but by the end of the season we had largely overcome the crowding problem and played a much more fluid game.

i often use a drill that divides to court into 3 channels, and name them 1,2 and 3, have your players line up behind each chanel and as they move up the court, call out 1,2 or 3 which ever number you call out that player must change chanel and the player in already in that chanel must move to the empty chanel. I find this teaches the girls to create a good balance of the court area and makes them move away from each other. 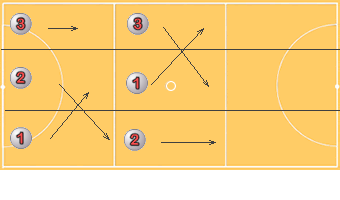