Does anyone have a drill to encourage under 11's to come forward for a pass rather than asking for the overhead pass all the time as they are 'running away' from the ball in their haste to get to the circle?

set up about 5 cones or points like this%3A. . . ^ (start) . .start from 1 cone run forward onto the one infront, shuffle back to the next then repeat. quite simple, but effective.

Hi I have over the years, got the girls to play a training game and just using bounce passes. This has encourage the girls to come foreward as they certainly won't get the bounce pass behind their opponent. Regards Lyndall

set up about 5 cones or points like this%3A. . . ^ (start) . .start from 1 cone run forward onto the one infront, shuffle back to the next then repeat. quite simple, but effective.

I use three girls. Two girls (a) facing each other passing the ball to each other. Have the third girl (b) stand behind one of the (a) girls, when the opposite girl (a) throws the ball, the (b) girl needs to come forward to intercept the ball.

Practice by having the goalies playing in front and (for the practice only) not allowing any passes higher than the shoulder. This can be a good way to train for the times when they have tall defenders. Practice the hold and lob for those times when you have shorter/quicker defenders...

I guess you need to encourage the shooters to use alternative methods of getting free then they can take front position to receive pass. One we use which can be adapted to didfferent forms is%3A

Get 1 passer 1 attacker & 1 defender. Attacker to move forward then back then sprint forward toward the ball having created the space by dropping the defender on the backward movement.

I think there is a drill called Freedom on here that shows different methods of getting free, if you use that and tell the passer only to pass as above; bounce, chest etc no lobs the shooters will get used to doing it.

Good luck and have fun

have a scratch match with another team in the same position a yours. if they dont pass the ball forwards the other team gets the ball. they learn pretty fast.

the bounce pass thing is smart too.

We play the "breaking game" - players only allowed in centre third in 2 "teams" could be bibs v no bibs, no positions just attacking and defending each other. No lobs allowed, must throw to a different team member than they received from. Other team is defending players, trying for intercepts etc., if they get ball they start passing. If there is a lob or the ball goes into other third or over sideline, stepping, contact etc the other team gets ball. Count passes and if a team gets 5 passes in a row without a turnover or lob they get 1 point, first to 10 wins (set number of passes or points to suit you). As long as you are strict about no lobs the players soon start to break and drive forward. It's fast and fun too.

Line all players up behind each other, placing yourself infront with ball, get each girl to run forward towards you for the pass. remind them to bring their hands up to receive the pass. it takes practice and confidence to get them to run towards a pass straight on.

For those that may be abit scared to come forward. get them to practice passing to themselves on the wall. as they become for confident, take them 3 feet away from the wall. this will show them how hard or soft their own passes are.

I'm new to training but my girls were doing the backwards run for the ball so I set up a square and they could only pass to someone running towards the ball. If they threw it to someone standing still or running backwards they were sent out of the square to do 3 push ups. They pretty quickly got the idea. And I used the 3 second rule so if you held the ball too long you were out too. The girls thought the pushups were halarious and weren't too serious about the pushup technique but their passes got alot better.

I'm not a coach, but I think if you get your girls to position themselves a few metres back from where they would usually position themselves, they will be more inclined to lead forward. At training, get the WA to start in the middle of the line with the GA a few metres behind her. Get the WA to use the whole line (left or right) to receive the centre pass. Get the others to hold their position until the WA has the ball and get to make an appropriate lead. Could even try this without defenders.

Hi, a great drill that I do with my team to get them both coming forward and holding the front space is the following:

Use the shooting circle, and have the players line up in two lines, one behind the other, either side of a feeder at the top of the circle. One line is designated as attack, the other defence. The feeder calls "play, and the two at the beginning of the line run to the baseline, turn and either get in front to receive the pass, or try to stop the pass.

The aim is to do the work within three seconds, stay in front of the opposition, and have a clean pass to the attacker. The feeder (who is preferrably the coach) decides on who wins. These two players then head to the back of the opposite line and it starts again with the next pair. 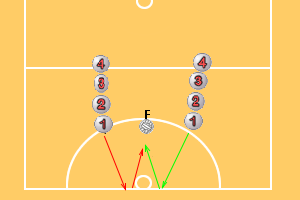 Players are encouraged through competition with their team-mates to come forward and receive the ball. Two lines on either side of a feeder at the top of the circle, one line is attack, the other is defence. On the feeders command, they run to the baseline and turn to either receive the pass, or stop the player/ball. The feeder can only pass flat, in front, and within 3 seconds. After they try, they switch lines to try the other side.

Players are encouraged through competition with their team-mates to come forward and receive the ball. Two lines on either side of a feeder at the top of the circle, one line is attack, the other is defence. On the feeders command, they run to the baseline and turn to either receive the pass, or stop the player/ball. The feeder can only pass flat, in front, and within 3 seconds. After they try, they switch lines to try the other side.
Netball CoachCoach

Every season I do the 1234 game which encourages the players to move forward to the ball to receive the pass and to create space.  This is better to play with an even number of players, however I still do this game with 7 players.  To play, divide into 2 teams - A & B.  Each team member is given a number from 1 to 4 for both teams A & B.  Start off by using 1 third of the court and then increase to 2 thirds for more space.  Team A starts off attacking with the ball and must pass it in the order of numbers that their team has been given eg%3A  1 always passes to 2, 2 always passes to 3, 3 always passes to 4 and 4 always passes to 1.  Team B, the defending team can defend anyone from the other team and they must try to intercept the ball.  All netball rules apply, eg%3A stepping, holding the ball, contact, obstruction, out of court etc...  If the defending team intercepts the ball, they then become the attacking team and start passiing the ball in the same way 1 to 2, 2 to 3 etc... and the other team must defend.

It is a waste of time trying to teach tactics to children under the age of 11. The children are developing at their own rate and at that age, they do not understand the benefit of getting in front or getting free from their player.

They would rather contest the ball and win the ball, rather than take the easy ball by getting in front. They also have the philosophy as to "Why get in front, I am further away from the goals and can`t shoot from there, I may as well stay back here."

Next time you see this happen at training, stop the play and gently ask them their intentions. You will be surprised by their answer.

Remember, they don`t think like us. They are still developing their skill. Hope this helps.

I always tell my girls that they cant get a pass unless they come forward for it. 1 yr none of my girls came forward, always ran back, I would count all the time someone came forward in games and it started at 3 and by the end of the yr it was all they were doing ! I had to remind them that for some passes they could drop back...