The breakdown: Turning the Ball Over - Part one 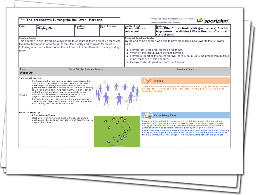 This session encourages your players to get to their feet quickly and compete for the ball following (or around) a tackle when the ball hasn't been off-loaded to a supporting player.

Why is this important?

Following a tackle, it's vital that the tackler gets to their feet and does their best to compete for the ball. Far too often players are too pleased with the fact that they have made a tackle and feel their their job is done - when in fact what they do next can be the difference between causing a turn-over or having to compete for the ball again!

The main goal for this session is to get your players, from a defensive position, to work hard on turning the ball over following a completed tackle to ground. By the end of the session you will have taken key steps developing the following skills:

This session is part one of a two part focus on turnovers following a tackle that brings the attacking ball carrier to the ground with ball in hand - Part two will be available very soon.