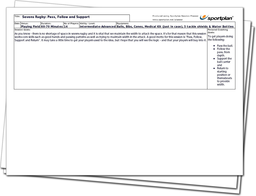 This Sportplan session works on maintaining the width to help your players attack the space as well as promoting core skills such as good hands and passing patterns.

There is no doubt that you must spend a great deal of time working on hands, and core skills. That said, you must also have patterns of play that will allow your players to have support in place to either ruck over a ball carrier that has been caught up in contact, provide deep running support, and to provide a second line of attack. While in Sevens Rugby we have lots of space to attack, we don't have lots of players to attack the space, so not only is it vital that the ball carrier is intelligent with respect to their decision making, it is also vital that other players think about what they can to do off the ball.

To get your team playing intelligent rugby, drawing in the opposition and offering deep running support to provide a second line of attack this session works on maintaining the width in the attack, promoting the message: Pass, Follow, Support and Return!