Set up 2 cones along the sideline, one at the 10' line one at the baseline/end line. Cone A is on the end line, Cone B is on the 10' line. Player starts to the left of Cone A. Player sprints forward and to the right of Cone B, going around Cone B while looking forward. Player then back pedals to the right side of Cone A, going around Cone A while looking forward. Player should end up on the left side of Cone A and should sprint forward past Cone B. Player should never look at the ground during the entire drill.

Coaching Points: Teaches spatial awareness, quick change in direction, and how to read and react to change. 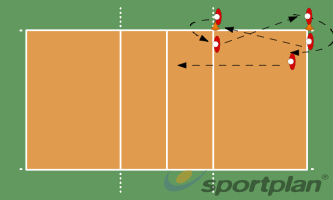