Each player has one basketball. Two even teams compete against
each other. They try to move the crocodile (heavy ball) towards the
opposing team’s line, by hitting it with their balls. The players are not
allowed to throw from inside their line. After throwing each player
has to get one of the balls back not necessarily his ball but the one
closest to him. The team that gets the crocodile past the opposing
line gets one point.

Variations: Players are standing on a bench while throwing.
Numbers passing
1 Basketball
All players line up in one big line. The ball is passed/handed over from one end of the line to the other using different passes
(Handover, through the legs, overhead, etc.). The players have to remember the player in front and behind them. On the
coaches signal the players spread out, run around and pass the basketball in the right order from player 1 to the last player
(and back), using different passes (chest pass, bounce pass, etc.). 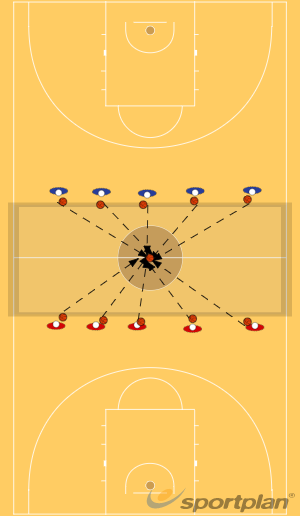 Simple Give and Go