Two teams of 6 (can be more or less depending on numbers) set up as kicking team and receiving team.

Here the blue team is kicking and has 3 balls. The team of 6 break into pairs (1 kicker and 1 chaser) and position themselves anywhere on or behind their kicking line (indicated with a cone).

The red team sets up to receive the kicks in any formation they desire.

All 3 balls are kicked at the same time (kicker has choice of kick, drop, punt etc) and the chasers set off to catch them. The red team need to communicate to which ball they are catching and also be aware of the chaser threat running towards them. The 3 chasers join the other side and switch places with the catchers who go to the kicking side. Those 3 that kicked first are now chasing.

If you wanted to turn it into a game you could add points: 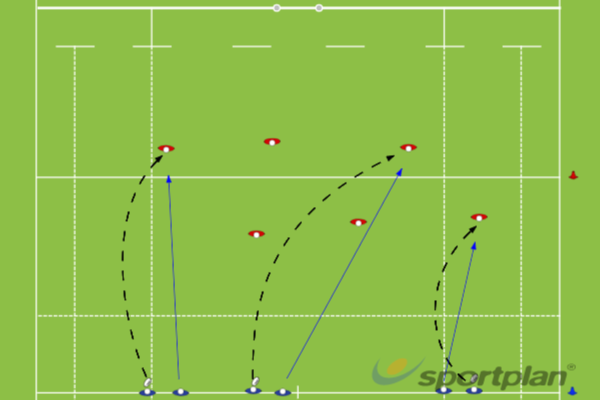