Divide the class into teams of 5-6.

This is a passing game where players pass the ball to reach the target i.e. a team mate standing behind a line or between two cones. The ball has to be caught cleanly by the child to count as a score.

Hand the ball to the other team:

• No running with the ball.

• The catcher may move up and down the line.

A score can be one or two points.

N.B. After a score or when the ball goes behind the line the ball is left on the ground and the throw-in is taken by the defending team. i.e. not the catcher on the line

After a score the scorer becomes the catcher in the end zone.

Start with no running then introduce can take 1 step then 5 then can run.

Keep teams small to encourage players to get as mant touches as possible. 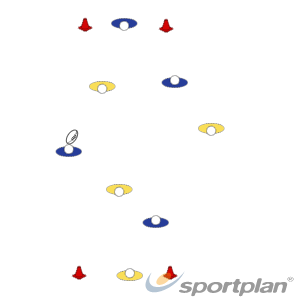