1x attacker starts on the 'halfway line' of grid with other two outside back to back with 2x defenders.

On command one attacker runs around orange cone, the second runs around the blue cone but is delayed. Defenders both go on the first command.

Once the players enter the grid effectively a 3 vs 2 will develop or more importantly a 2 1 vs 2 due to the delay of attacker 2.

Attacker 2 must decide which support line to take. The first players can attack the defenders and aim to create the space for the third.

Players to get in position as quickly as possible 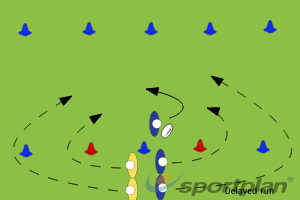