Rugby tennis inolves 2 teams at opposite ends of a pitch in five sections. The game starts with two balls and can be done with any number of players on each team. The teams kick the ball to the opposition with the aim of getting the ball to hit the floor, if the opposing team catches it then can kick it right back, but if it is dropped the kicking team gain 1 point for the closest box and 2 for the furthest box. The ball cannot be kicked in dead ground which is the centre box but it can be picked up. 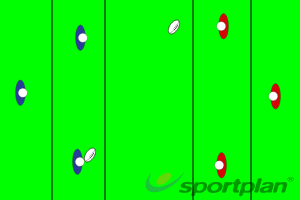