Too many players run across the pitch, eating up space and making attacks easy to defend against. This drill teaches players to think about their running lines and to attach the pass.

The cones should be set out as shown in a grid approximately 10m x 10m. A player acts as 9 and gives a pass to the first receiver who runs and inside line and upon receiving the ball straightens. He then gives a pass to the second receiver who also runs an inside line then straightens. The second receiver then cuts towards the first receiver and gives a return pass .

Players should think about changing their speed, accelerating onto the pass but slowing after giving the pass to be in position to receive the next pass.

The exercise can be done of the other hand without changing the cones in order to teach players to straighten their lines of running if they are running away from the ball.

A third receiver can be added in so the second receiver has a choice to make (shown in blue). Again this receiver should be running an inside line attacking the ball.

Once players get used to the exercise, defenders with tackle shields can be put on the first cone of each set to add some pressure on the attackers 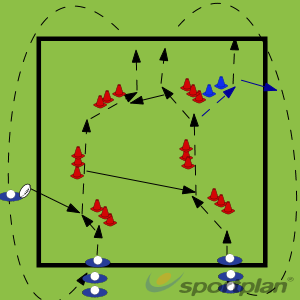