- The Defenders start at one side of the playing area.

- On the whistle, Defence move into defend the nearest ruck.

- The attackers have one phase to try and beat the defenders.

- Once the tackle is made or ball is lost etc. the attack is over and the defence move onto defend next ruck.

- The coach dictates the speed of ball as to make it easier or harder for defence.

- The defence work for 4-8 separate attacks even if this means defending the same group more than once. This means that will work back and forth across the area

- Predominantly a defensive practise. Can be used to look at set up around ruck, set up of defence, defence in open play

- Clarify positioning and roles of ABC around ruck

- After single phase, this be can used to coach quick set up of defensive patterns around ruck

- May also be used as an attacking practise (seperately or at same time). How do we set up in open play, what options can we use to make sure our 1 opportunity counts 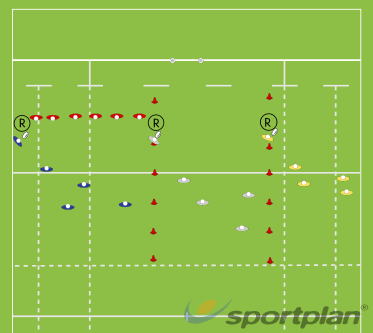