Set up a large square with eight cones spaced around it - four at each corner, four in between these. Organise your players into eight groups of three or four. Each group starts with a ball and from one of the cones.

On your call, a player from each group picks up their ball. They then run across the square to the opposite cone, evading the players running in the other directions. When they reach the opposite cone, they pass the ball on to a player in that group who repeats the rugby drill.

Players can be directed to move across the square using a variety of movements, such as:

Once across the square, think also about how the next player might receive the ball. For example, rather than have the players pass to each other, the receiver could have to rip the ball out, with the ball carrier providing some resistance.

Repeat the warm-up for several minutes and each routine a number of times. Start slowly at first, then build up the speed. This will help your players warm-up properly, all while practising core skills. 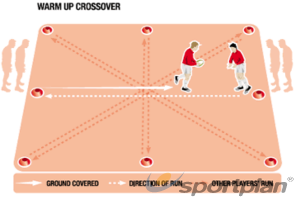