A and D start on the blind side of the ruck, and are sent round by the SH when he is ready

D are looking to set up ABC and out, ID their roles and who they are defending, and then produce line speed and defend

Play continues for one phase until try, tackle or mistake

A and D then continue 2 the next 2 rucks before breaking, always being started by the SH

Initially, we want to set up Rocks and Bales as our most basic set up. Important that Rock 2 sets very wide to  stretch defence and provide us with gaps to attack between defenders. Bale also wants to be uncomfortably deep.

Inside ball can run inside the 1st receiver, and can take short pass off 9 if B defender drifts, inside ball off 1st R or support shadow ball 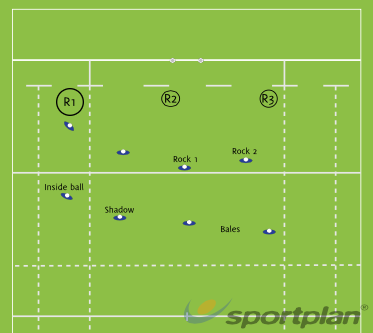