On Coaches 'Go', D must retreat and touch try line before they can turn and defend.

A attack immediately without waiting for defence.

Attack until a try is scored or a touch is made

A1 has to run straight to interest D1 and stop him from drifting early. This will also allow A to create depth

The pressure pass will be from A2, so its important that A2 holds his depth to give himself time to catch and pass, and to read defenders hips

The shape of D2's hips will allow us to make the decision. A has to try and turn in this defenders hips to create space on the outside for A3.

If defenders hips are facing out, A can use hands to allow A2 to straighten D2's hips and pass to A3

If D2 hips are already turned in, then we dont need to use A2 and can miss pass to A3 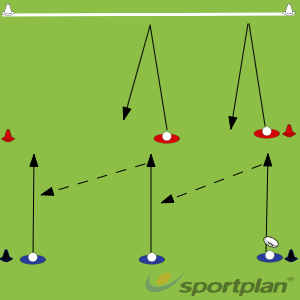