This lineout move, call name Beast Ball, is thrown to three, popped to forward acting scrum half and is passed to the strongest runner of the remaining three. One prop, a second row and the number eight are in the lineout, in that order. Eight recieves and pops to the smallest forward. Then, the remaining second row is passed to by the smallest forward and commits to a crash ball. By that time, the flankers ruck over and secure and then the scrum half passes to forwards that were in the lineout. Afterwards, the backs take over. 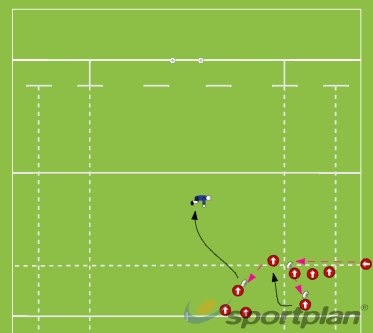 Line Out Only Restart

3 pod lineout lifting - off the top