Set up a "T"-shaped course, as in the diagram above. Players work against the clock, or race each other over five stages.

Two players work through a zig-zag course. They face each other, with one player starting off running backwards. At each cone the player running forwards shouts "change". Both players change the direction for the run to the next cone.

Catch me if you can drill

Set up a 10m square with two obstacles in the middle. One player sprints round the outside of the square to the opposite corner. The other player sprints through the middle of the square and through the obstacles. The first player to the opposite corner wins. - See more at: http://www.betterrugbycoaching.com/Article-1566-119-Rugby-Workout,-Fitness-and-Conditioning-Speed-and-Agility-Running-circuit-to-improve-rugby-fitness-and-speed#sthash.xvwlJzS1.dpuf 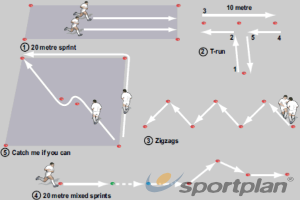