Players pair off one defensive one attacker. The attacker start with the ball on the baseline, with the defender standing in front in a defensive guard.

Attacker takes 2 to 3 explosive dribbles forward around the defender, then makes a jump stop. (No traveling or stepping aloud) Pivots 180 degrees either forward or backwards. As he pivots, he should swing the ball into a triple threat position while leading with his elbow (this is referred to as a ball swing). This will keep the defensive players from smothering the offensive player.

Attacker then passes to the defender, follows the pass and then takes up a defensive guard in front becoming the defender. Players switch rolls and repeat. 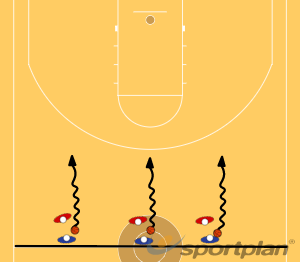