Players pass the ball five times at each cone set before then moving to the next.

Can be played as a competive game to encourage fast accurate passes.  At the first cone pass ten times then 5 at each subsequent cone.  If a player misses the trap the team goes back to the beginning and starts again.  If a team on the red cone finishes their 5 passes before the team on the white cone they can bump them off and send the team back to start again.  Teams reaching the end score 1 point.

Use phrases like - on the stick off the stick

Players must trap the ball they cannot pass without trapping first

Foot work to move from trap to push 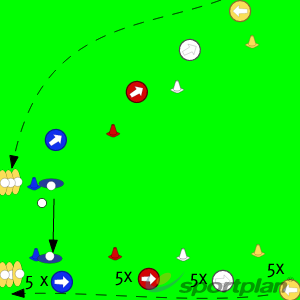 cross over passing on possession

Adding to the pass

Aerial Pass 1: Over the Chasm

Aerial Pass 2: Over an Opponent

All the Way Across