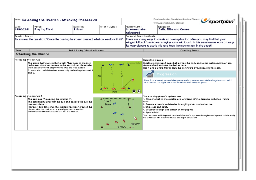 Rating: 4
from 5 members ratings
Log in to view
This Sportplan session looks at decision making when releasing the overlap and using it to overload the opposition's defence.

Quite often players will know how to create and release an overlap but in practice will keep hold of the ball, with the winger/ fullback/ back-rower carrying the ball wider and wider until the chance is gone and they end up going into touch.

To ensure your players keep the momentum going and use the overlap to their advantage we work on recreating game situations where your players need to decide whether to carry the ball, dummy the pass or pop the ball off to the supporting player to run onto.

Designed for squads large and small of all abilities we start with a simple 3 vs 2 drill, designed to instil confidence in your players and encourage them to release the ball to create the overlap for the extra man to carry the ball up the pitch. Of course no game is ever quite as simple as this and we recognise this which is why the drills become progressively more and more difficult, bringing in more defenders and adding to the complexity of the passing moves.

To bring the session to a fun conclusion we play an 8 vs 6 conditioned game - designed to encourage your attackers to put into practice everything they've covered in this session. Come the end of the session you should see your players making more positive runs and are more ready to release the ball to continue the move.