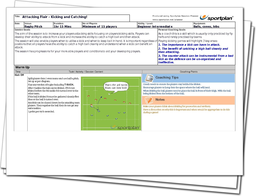 This session works on the kicking and catching elements of your team's play, increasing your attacking play and helping you take the advantage! Develop your player's ability to attack from a kick, catching the ball from a high kick and also recognising when is best to utilise a kick. No matter what position your players are in, it's important they all learn to kick and catch a high ball cleanly!

Finish off with a modified game to see how much your players have improved throughout the session. Be ready to use the kick as a new weapon and attack with flair!

Like many other international tournaments, we've had to wait a little longer for it to start but it's time to get excited for some big hitting!
read more