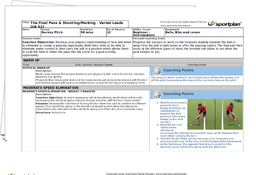 NEW CONTENT The new Final Pass & Shooting series of sessions gets your team on top of their game in the attacking 23.

When the opportunity comes to make connections in the final third of the pitch, it’s important to take full advantage. Therefore getting your forwards to make effective leads to provide strong passing options is paramount. Use this session to build a cohesive forward unit.

After a full physical warm-up, the session recaps some aspects of the elimination series, focussing on the players technique to beat the defender to push the team forward and create the next passing option. The practices recap their weight transfer and the drag away from the defender to eliminate.

The next section progresses the moderate speed elimination practice adding a final pass into the circle. The pass is played into a leading attacker who has to work together with the ball carrier to time their lead to receive the ball on the move to be able to take a quick shot at goal. The practice initially starts uncontested to allow the leading player to practice leading one way to quickly vary the direction and offer the pass in the different direction. Varying the lead then makes it far more difficult for the defender to cover the passing route when they are bought in as the session progresses.

The final conditioned game see’s a smaller pitch with the two D’s very close. The tight area will emphasise the best, most effective movement the offer the pass.