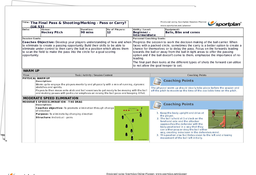 NEW CONTENT The new Final Pass & Shooting series gets your team on top of their game in the attacking 23.

Across the field, there is a time to pass and a time to carry. Determining when is best to do one of the other is vital in the success of an attack!

After a full physical warm-up, the session recaps some aspects of the elimination series, focussing on the players technique to beat the defender to push the team forward and create the next passing option.

The main bulk of the session then adds to the double leads learned in the last session. It now instead puts the emphasis the ball carrier and to make a decision as to whether to pass or carry. The amount of pressure on the ball carrier increases throughout the session as more defenders are introduced to the practice, creating a more game-specific environment to practice under.

The final conditioned game see?s a smaller pitch with the two D?s very close. The tight area will emphasise when best to pass and when to carry to space or eliminate.