Pursuers line up on end line (two deep if necessary for numbers).  They begin by starting to do mountain climbers at the end line.  They keep doing mountain climbers until a coach tosses a ball in their direction.  The player must then attempt to drive towards the ball and get a good contact.  The drill typicall ends after each pursuer has attained a designated number of "good" touches (usually 3-5).

This is a great drill for getting in conditioning and skill work at the same time.

Coaches should stress pursuers keep their level up by doing quality mountain climbers throughout their entire turn.

Define a "good" touch before the drill.  This can vary on the skill and physical abilities of the team.  In general, a good touch is a touch that gets the ball up and is playable.  For more advanced players, coaches often insist on balls near the target setter box.

When we run this drill with our 16-year-olds, we typicall toss lower balls that push their limits for speed and agility in order to get a good touch. Insist on a playable ball in order for it to be a good touch.  Do not just toss in the same pattern (player A, then player B, then player C) every time.  Mix up to whom you are throwing to eliminate guessing.  To make it even a little more difficult, coach can sometimes look at player A but toss in player C's direction to make sure they are ready and watching the ball instead of just trying to work the drill.

Things to look for / emphasize.

Effort, effort, effort.  This drill is about defensive pursuit and mindset.  Great defenders never quit and always try, even when they think the ball is unplayable.  Develop that attitude and expectation.

Look for pursuers to try to get at least three steps in before hitting the ground while playing the ball.  We want them to thing about getting to a ball in a playable position instead of "looking cool" or being lazy by diving to a ball they could have played on their feet.  After all, players are more likely to get that next ball up, if they stay on their feet and are ready for the next attempt instead of having to get up off the court.

Stress that players begin their pursuit by staying low with weight forward.  Players have a tendency to rise up and then run upright.  If they eliminate that movement and drive low and fast towards a ball, they eliminate unnecessary movement and will be more likely to be in position to play tougher balls than when they run upright and have to go back down to play a tough ball. 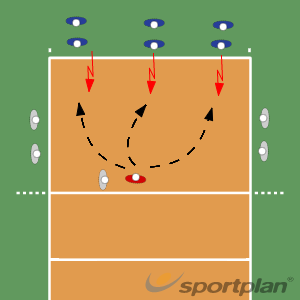