Extra players positioned along the baseline from T-spot to corner. Spare balls with extra players.

Game starts with feed from baseline.

Players can shoot as soon as they enter the D.

When ball is turned over (including goal scored) it must be played back to the feeder on the baseline and received by any player in the playing space before attacking.

Rotations: player that turns the ball over and feeds in to baseline switches out of playing area. Feeder becomes active in the playing space.

Attacking with perceived overload with deep outlet on baseline.

When ball is turned over ball no longer HAS to be played back to baseline and one feeder can join the attack to create the overload.

Use of the deep outlet to start attack.

Vision from player on baseline to distribute into space.

Identifying where the space is and use of width to attack even when fastest route to goal may be through the middle. 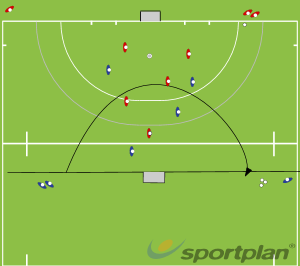 Attacking down the Wing

Earn the right to attack