Go through defensive set-up and attacking press on white board first.

Always start from a 16. Defence to work ball out over red line. Attack to score a goal.

Award an extra goal for successful transfer (attack or defence) as carry-over from last week’s session.

Defence to keep angles and cover each other. Stress that this is applicable throughout a game, not just for 16s.

From 16, aim to get ball up the right wing. Q&A reasons for this: we are attacking the opposition’s weak side; clearance up the wings protects the middle of the park.

Attack to fill the gaps on the press. Deeper players call to players in front “step left/right”. Sticks down.

Successful press = ball is intercepted or goes to defensive left back 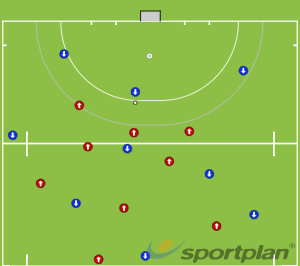