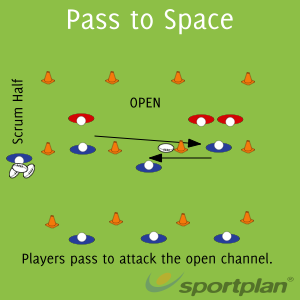 Give each training area one ball and tell the players the following......

There are 4 cones in a rectangle , 2 red and 2 blue. The 2 defenders stand within the square, and on the coach's call, they must go and touch the called colour cone.

As the coach calls it the attackers can go.The ball starts with the attacker in the middle.

His aim is to attack the space in between the two players, and execute the first opportunity that presents itself. either one of the players will move in on him, therefore opening up space for the support runner on that side, or both will commit to him, or none in which case he is through!

React to space and attack

5 players start on a straight line of cones about 5m apart. 10m away there are 5 more cones. Two of the 5 cones are blue, and two are red, and the middle cone is orange. The player on the orange cone never defends, he always attacks and always starts with the ball in hand.

The coach shouts a colour and the players who are standing on those cones must run forward and touch the cone 10m away from them. It will always be 2 defenders, but their positions will slightly vary. Once the first defending player has touched the furthest cone across from where he started the orange player can initiate attack. The orange player will have 2 supporters, one either side of him.

The ball carrier should look to attack the "Mid-Space" i.e. the space between the 2 defenders, as hard as he possibly can. This will cause at least one of the defenders to move in towards him, and therefore open up space for the supporter.

You will notice as the drill goes on, if the ball carrier runs at this space hard enough, the defenders are sometimes caught in two minds of "its your man" and the attacker will glide straight through the gap, but only if he is explosive from the word go!!