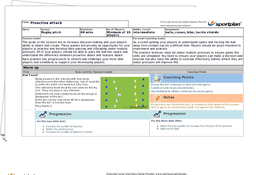 When attacking, it’s important to not become predictable. By creating players who have a cool head and the ability to make the correct decisions will lead to a team that are free to attack and create with decisiveness. This session focuses on a proactive attack by developing players ability to pass and offload effectively.

Attack proactively to prevent having to defend reactively.

Get your players into the swing of things and up for it with a game of Kiwi Touch to warm-up before getting stuck into the technical practices. The first practice is a 2 v 1 to encourage correct decision making and to time the pass so that the attack continues before taking the contact. The next drill works on the players ability take the contact but still off load the ball proactively, rather than reactively. By developing this into your teams game, it will allow them to recognise how proactive attacks can draw defenders to create space elsewhere. Finally, the modified game at the end gives them the opportunity to put these skills into practice in game play.

Technique Focus - Pass or offload at the right time and draw defenders to create the space for a teammate.

Get your team thinking a few steps ahead in order to attack simply, with clarity and pace.