Moderate Speed Elimination PLUS Closing Down to Tackle 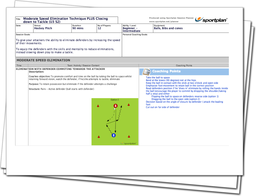 NEW CONTENT Begin to ramp up the speed a little bit with the next session of our Elimination Series!

Being able to eliminate at a moderate pace is a dangerous skill to utilise, particularly when counter-attacking or when driving towards the circle. Develop your players ability to shift the ball one way before dragging in the other direction to create the space to eliminate.

The second part of the session focuses on how the defender can try to dictate to the attacker where they want them to go so not to get eliminated easily. It works on how to keep the distance so not to get eliminated but still provide enough pressure to not let the attacker get their eyes up to make a pass of eliminate. It then progresses to show how defenders are best to close down the attacker, arching their run to run with the ball-carrier rather than straight towards them.

The session ends with a conditioned game which should induce plenty of elimination opportunities to create a match-realistic scenario for both the attackers and defenders.

Before long, this series of two-way eliminations will have your attack and defence working to their full potential both going forwards and tracking back!