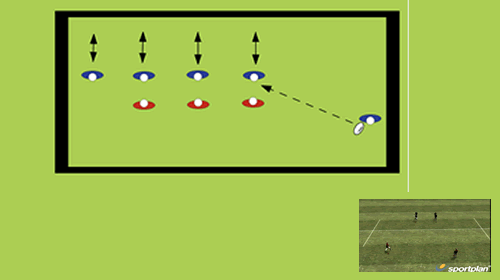 Set up a channel 20m long and 15m wide with cones every 10m along the length (red, yellow, green).

Set up 5 lines of players between the first two cones, the two players on each end are the defenders (red), and the three in the middle are attackers (blue).

The ball starts with one of the defenders on one side and that player runs forward and throws a long pass to the defender at the other end of line. He then continues his run around the far (green) cone to defend.

The defender who has caught the ball puts it down on the middle (yellow) cone and continues his run around the far (green) cone to defend.

Once the second defender has put the ball down on the yellow cone the attackers may begin their attack. The player nearest the cone runs to pick up the ball and then they attack the two defenders, trying to score over the line marked by the green cones.

Start from the opposite side to practice passing in both directions.

3 attackers start at the beginning of the grid who will go up against the tackle bag first and then the person in the body suit second; these two should not stand next to each other unless you move on to the progression.

At the coaches command the attackers will go into the tackle shield first with the ball carrier going to ground and the two supporters either both clearing out or one person clearing and the next picking up the ball and going into the next defender 5 metres behind who will be in a bodysuit.

Start the session with a game of single Tag rugby.

Basic tackling skills. Tackle to start in a low position. Tackler to position their head behind the player, squeeze their arms around the player an drive in forward off their knees.

Basic tackling skills. Tackler to start in a low position. Tackler to position their head behind the player, squeeze their arms around the player an drive in forward off their knees.

Groups of 3/4 1 Tackle Sausage. 1 Tackle bag.    1. Tackle Bag conditioning. Players align 6m apart, one side with tackle sausage. Work for 1 min constantly tackling and carrying sausage back and forth with partners.  2. Tackle and Roll conditioning.  Same as before but introduce roll after making the hit. Roll with bag to escpae collision area. then same as before, pick up the sausage and run. 3. Add Defender A 3rd player is introduced, holding Tackle bag who acts as a attacker clearing out the ruck. The Defender must bounce up and clear the tackle bag player coming over the ball, then same as before.  4. Tackle, Roll, Clear  All 4 stages togther now, adding a roll in before clearing out the attakcing player with tackle bag.

Players 3m apart Â slightly crouched One of pair nominated as tackler On balls of feet, with feet shoulder width apart the coach calls either Right or Left.

2 sausages 1 bag  1 ball  Step 1 - Low chop tackle on the sausage.  Step 2 - Bounce! Track back, chest to floor, do a high.impact bag hit.  Step 3 - Run around the bag, pass the ball of the floor, complete a live leg tackle on the attacking player. Next player starts when first player finishes.

This is a simply set up game designed to test players' ability to continuously make tackles, especially when fatigued. Each area should be about 10m long and 5m wide - 1 tackle tube required. Starting from one end, a player runs to the other end where the tube is standing up, and the player tackles the tube to the floor. That player must then pick the tube up and run back to the original position and place the tackle tube there, stood up. The other player in the pair runs from their end, and tackles the tube to the floor, before picking the tube up and carrying it back to thetheir end. Continue this for one minute.

Players 3m apart Â slightly crouched One of pair nominated as tackler On balls of feet, with feet shoulder width apart the coach calls either Right or Left.

Drill to practice chasing and tackling someone. Roughly 5m x 10m channel. Players lined up in two lines behind red cones. First two players run out to white cones where a coach/feeder passes one of the players the ball.  The player who receives the ball runs to try and score between the green cones, the other player tries to chase and tackle them.

Groups of 2  Tackle Bags  Cones 1. Warm up light contact Players line up opposite eachother and run to meet each other in the middle. When the coach says so, the coach will leave it late to hold an arm out for the attackers to step too. The Defenders will make a late decision to tackle on either left or right shoulder.  2. Progress to adding bags & defenders turning. This minimalises the time for defenders to make decision and increaces the intensity.  3. Progress on to full live tackle.   Increace the intensity and make sure the players back track back to starting point before starting next set.

Teams of 3 one team with ball. Start with both teams on their own goal line. Team with ball attempts to score Defending team allowed 1 on 1 tackles. When tackled, both players get to feet and ball carrier restarts game with free pass. Knock on, forward pass, in touch all result in turnover ball and free pass Change attacking team after each score.

1. Tracking  Create a V shaoped conned area.  Defender at one end, attacker at the other end.  Attacker attempts to score using footwork, defender has to track them and try stop them by gettign a shoulder on contact to there hips. (50% intensity) 2. 1v1 Track and Tackle In a grid an attacker is positioned on one end and a defender at the other end.  Defender passes to the attacker who attempts to score against the defender within the grid.  3. 1v1 Tackle Channel  Players line up in two lines adjacent to the coned area. Coach shouts go and the front two players run round their end to end up facing each other. The coach passes the ball to the attacker who runs at the defender, and the defender tries to take them down. 4. 2v2 Track and Tackle  10m wide channel, 2 attackers start with the ball while 2 defenders atart at the other end. when instructed the attackers attempt to score agaisnt them. Do continuous reps.

Step 1:  Both the attacking and defending players complete 2 chop tackles on the tackle sausages.    Step 2: The attacking player picks up the ball, and attackes the opposing corner where the defender is coming from.

Start with this simple tackling drill with no resistance to the tackle to get your players warmed up and used to contact.

Groups of 2  Tackle bag  An attacker holds a bag 2m away from a defender. Defender hold hands behind his back, while bagholder stands in split stance.  The Defender then does continuous steps and shoulder impacts off each shoulder one after the other.

Groups of 2  Tackle Bag    An attacker holds a bag 2m away from a defender. Defender hold hands behind his back, while bagholder stands in split stance.  The Defender then does continuous steps and shoulder impacts off each shoulder one after the other.

4 sausages  4 Bags  The sausages and bags are lined up alternately in a line. 8 defenders start lined up outside of the tackle grid. Whistle goes, the tacklers must shuffle across as a team (in a line) to line up opposite a bag or sausage before making a hit.