1. Shrink the court, to force the players to tip or chip. If you use the full size court, players may be enclined to smash.

2. Teams will rotate and play just like a normal game of volleyball, but since the court size is reduced, the players will be forced to change their typical attacking style from a full swing to a chip or tip.

3. To serve, players can either hit the ball overhand, or they can set the ball.

4. Keeping score is optional. If it is one of the first times you are playing the game, I suggest not keeping score as this can detract from the learning components. If you are in the middle or towards the end of your season and need to work on tipping and chipping, keeping score could be a good motivator.

**Run this drill after the "Pancake" drill, so to practice what the players learned during "Pancake".**

Team sizes can be anywhere from on on a half court, to six versus six on a full court (though is can get a bit crowded at the upper limit) 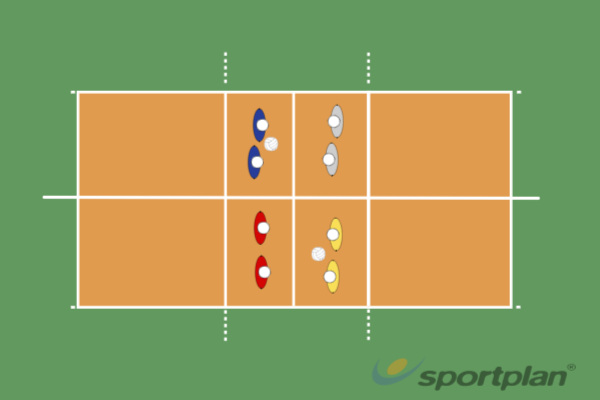 Volleyball : how to serve a volleyball

The box drill by the art of coaching volleyball

Memorise and get the balls

Volleyball: reception of the ball.