Stage 1: In pairs with a ball, set them up 3m apart on a cone facing opposite ways (north and south), also set up 2 more cones 8m apart. Players will practice passing the ball between each other using the techniques shown in the tutorial. The 3m gap if for float passing and the 8m for spin passing. Have them do 5 passes each from 3m and then move out to 8m. Once those have been completed, have them turn the opposite way and do the same off the other hand.

Stage 2: In groups (ideally 4 but can be adjusted up and down depending on numbers) set up 4 cones in an attacking formation. For the 1st, 2nd and 3rd receiver, set up a different coloured cone approx 2m in front of them. The person playing scrum half will pass to the 1st receiver who will be walking forward towards the cone in front. The pass must go to the front cone not to where the receiver started from. Once the 1st receiver has caught the ball, they will reshape it in their hands, have full 10 finger contact and pass to the 2nd receiver moving forward and so forth.

Stage 3: 5 Cones are set up in the shape of an 'L', 3 should be set up 5m apart and a different colour set up a further 10m from the end cones. 3 Players will set up inside the yellow cones and the ball will start at the end of the line. The ball carrier will move forward taking a couple of steps before passing (using the techniques learned in the previous 2 stages), the ball will get moved down the line to the 3rd player who after passing the end player on the other side, will pass to them (backwards of course) and that group will set off. At some point during the drill the coach will blow the whistle (or call out a key word) and the players must spread out to the further cones. The drill is the same but the pass is longer and will require a spin pass. The coach at any time can blow the whistle and bring it back to the short pass. I would do each 3 times. 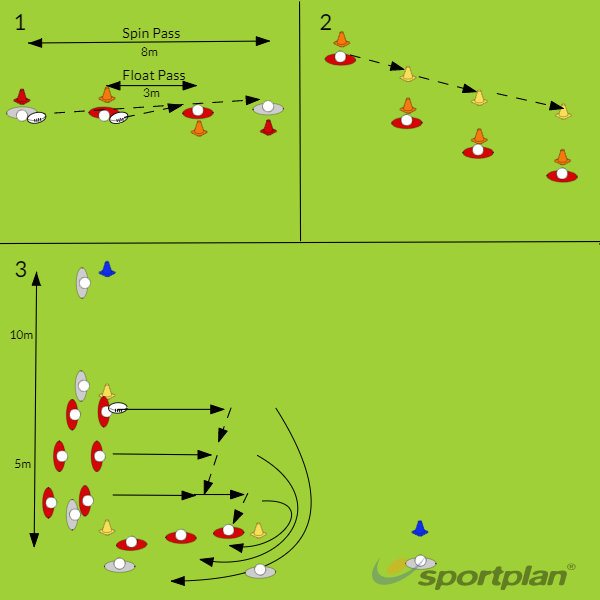